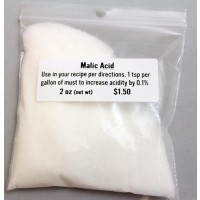 Malic acid is an organic compound with the formula HO2CCH2CHOHCO2H. It is a dicarboxylic acid that is made by all living organisms , contributes to the pleasantly sour taste of fruits, and is used as a food additive. Malic acid has twostereoisomeric forms (L- and D-enantiomers), though only the L-isomer exists naturally. The salts and esters of malic acid are known as malates.The malate anion is an intermediate in the citric acid cycle.Malic acid, when added  to food products, is denoted by E number E296. called extreme candy.The taste of malic acid is very clear and pure in rhubarb, a plant for which it is the primary flavor.The process of malolactic fermentation converts malic acid to much milder lactic acid. Malic acid occurs naturally in all fruits and many vegetables, and is generated in fruit metabolism.